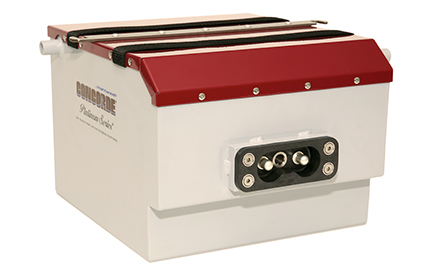 Operators have requested a higher capacity battery for the Bell 407 as this helicopter is often used in high cyclic and short leg operations. In these types of operations, the original equipment 28 Ah battery is not getting fully recharged causing starting performance during successive engine starts to degrade and shorten battery life. The decrease in power also causes unnecessary wear on engine components.

Air Ambulance and Oil & Gas fleets conduct some of the highest cycle operations. These operators will realize an increase in starting power and improved performance after upgrading to the RG-427, 34 Ah, 24 volt battery that is packed with over 20% more power than the 28 Ah battery.

Rotorcraft Support Inc. has added the RG-427 to their FAA approved STC SR01456LA for the Bell 407. This STC was also upgraded to include RG-407, 27 Ah, and RG-427 installation approval on Bell 427 helicopters. This is the first FAA STC approved for Recombinant Gas (RG®) sealed lead acid batteries in the Bell 427!

Rotorcraft Support, Inc., has been in business since 1986, and is a full service helicopter maintenance facility located at the Van Nuys Airport in Southern California. RSI`s helicopter maintenance and helicopter repair services are beyond compare. Their reputation for safety, precision work and responsiveness has earned them respect in the helicopter community. They value that respect, and continuously strive to maintain this level of excellence in their organization.